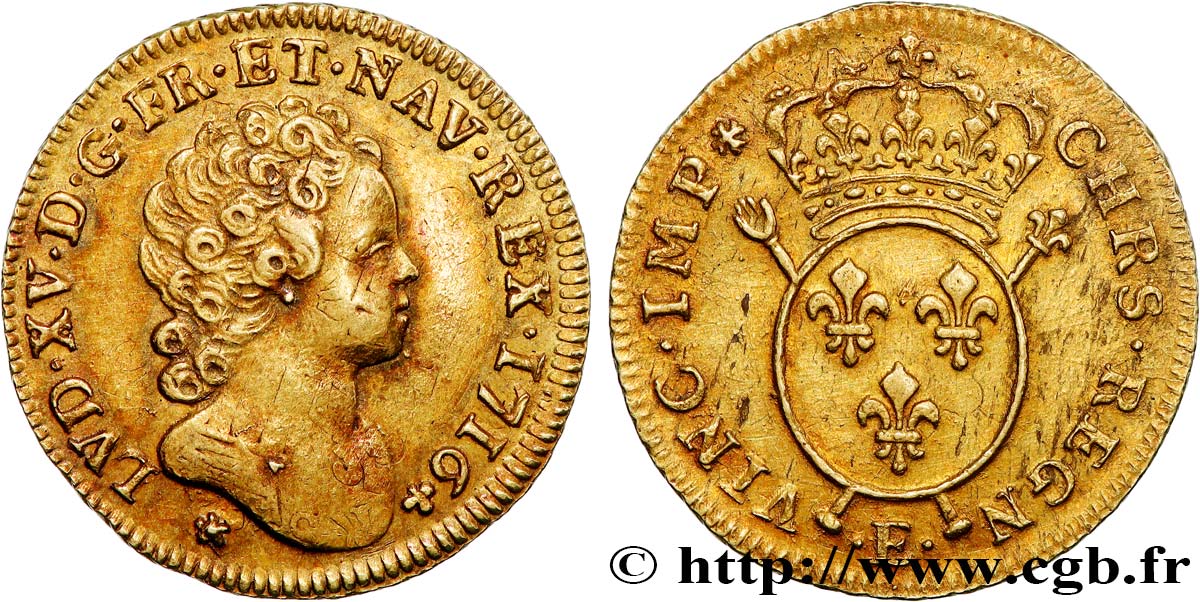 Born in Versailles in 1710, Louis XV was the son of Louis, Duke of Burgundy, and Marie Adelaide of Savoy. He succeeded his great-grandfather in 1715, due to the untimely death of his grandfather, the Grand Dauphin, and his father. During the minority of the king, the regency came to Philip, Duke of Orleans, nephew of Louis XIV. After an unsuccessful attempt by government advice substituted Secretaries of State (Polysynodie, 1715-1718), the regent returned to the maxims of his uncle and preserved monarchical authority. The real news of the regency were in the failed attempt to reform economic and financial system (Law) and liberalization of morals and a different orientation of the literature, in reaction against the rigor of the previous century. Major, Louis XV was crowned at Reims in 1722. Then succeeded as prime ministers: the Duke of Orleans (1722-1723), Duke of Bourbon (1723-1726) and Cardinal Fleury, former tutor of the King (1726-1743). This period was marked by the War of the Polish Succession (1733-1738), which allowed France to place the dethroned king of Poland, Stanislas, stepfather of Louis XV, at the head of Lorraine and, ultimately, to hand over the duchy. The Ministry of Fleury, peaceful mind, was for France a period of recovery after the events of the previous reign. Fleury started in the war of the Austrian Succession (1741-1748) was less happy results, the Peace of Aix-la-Chapelle making us give up the conquests of Maurice de Saxe in the Netherlands. It was during this war that Louis, who began to rule, enjoyed the height of its popularity, especially during his illness in Metz (1744). The Seven Years' War (1756-1763) will be her quite disastrous. The Treaty of Paris, France loses Canada and India. The annexation of Corsica, in 1769, was a belated success, and smaller. England triumphed in its age-old struggle for dominance of the Atlantic. The Austrian alliance had proved of little use and the emergence of Prussia was issued a new threat, whose full extent is revealed in the following century. Inside, the successive ministries clashed with opposition parliaments, including the Parliament of Paris, and permanence of the Jansenist movement. The firm policy conducted between 1770 and 1774, could not redeem the reluctance of previous decades. In the Enlightenment, the gap between the old religion and monarchical authoritarian exercise of power, on the one hand, the evolution of minds and manners, the other kept growing. The royal power froze in servile repetition of maxims own government to Louis XIV. Louis XV and Louis XVI had no will of their grandfather they floated in the habit of glory too large for them. From the inside, the "old machine" showed signs of disruption, instability and ministerial despotism simultaneous reign favorites. Discomfort appeared in the elites nobility, office, military service were no longer safe values ​​once. Public opinion became a force. While political power tended to immobility, the administrative machine, her, modernization, for the sake of testing, measuring, good management. The reign of Louis XV for France was an era of prosperity and economic development, along with the extreme flowering of the arts, letters and sciences. Łęczyńska Mary, married in 1725, Louis XV had a son, Louis, born in 1729, who died in 1765, leaving himself three son: the future Louis XVI, Louis XVIII and Charles X.